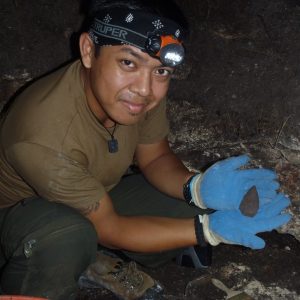 Richard Nicolas is a US Navy Veteran pursuing a doctoral degree in Anthropology with major emphasis in Archaeology. His primary research focuses on understanding the development of social complexity and ancient migration patterns, which includes the peopling of island and coastal regions in Southeast Asia. His dissertation will investigate the production and distribution of ancient jade ornaments found across South China Sea, specifically East Sea in Vietnam and the West Philippine Sea. Richard had trained in both archaeological and anthropological field research conducted in Belize (Mesoamerica), the Mojave deserts and Channel Islands (California), Ifugao (Philippines), and  finally Battambang, Cambodia.

He also has a doctoral minor from Asian Languages and Cultures (ALC) department, in collaboration with the Center for Southeast Asian Studies in UW-Madison, where he was trained to teach the Filipino language. He has additional language training in both Bahasa Indonesia and Vietnamese and has been awarded language scholarships which includes the Foreign Language and Area Studies (FLAS), Southeast Asia Summer Language Institute (SEASSI), and the Critical Language Scholarship (CLS) to attend a summer immersive language training program in Malang, Indonesia.