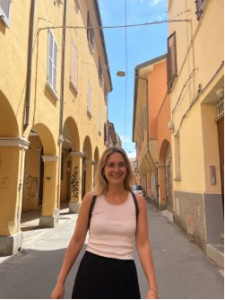 Marianna is a first-year doctoral candidate in Cultural Anthropology. Her research interests focus on decolonial feminist politics in popular music of the French “banlieue”, and cultural heritage legislation related to protest music. She holds a B.A. in both French and Music from UC Berkeley. As an undergraduate, she spent a semester in Bordeaux, France, where she researched the popular music of the French “Balance Ton Porc” movement. Before starting at UW-Madison, she spent a year in Bologna, Italy, where she researched Italian cultural heritage policy, popular music, and national identity at the University of Bologna. She is an avid piano player and has worked as a piano instructor for the past 3 years.