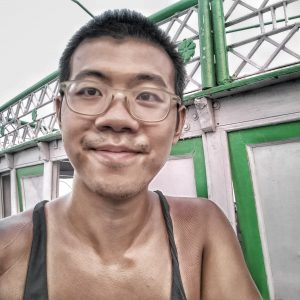 Here is Ding, a Chinese lawyer, financial practitioner, psychological counselor (with BA), and rescue diver as well, worked as a PM in an internet media, been immersed in south and southeast Asia for over 6 months. My research was about conflict resolution and responsibility distribution in both political and moral contexts, in Daqing, an oil city in China. I try to depict the morality in the moral vacuum, interpreting how could people keep doing what they claim as wrongness, while never claim their “rights”. In what condition, the existence of the concept of “human rights” can benefit the marginals, while in what condition, its existence could inversely become a rejection to the others’ personhood.

I am also interested in philosophies and ontologies of natives (including famous western natives) and social/ cultural history. By my research, I question the border of subjectivity (no matter as “in-dividual” or as “community”) and the priority of one’s narratives about her/his/their own feeling. I hold a doubt on the concept of “rights”. I view the tension between “particularism/ relativism” and “universalism/absolutism” as a result of mis-framing of the relationship between “narrator” and “listener”.

To me, anthropology is an attempt to understand the sophisticated difficulties of human conditions. Difficulties as difficulties, rather than as some devil’s faults. As Edward H. Carr said, realism is an acknowledgement to the existence of conflicts between one good and another good.