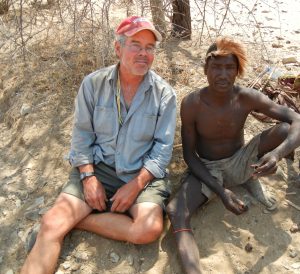 My research emphasizes the evolutionary ecology of Early Pleistocene hominins, particularly the diet and foraging strategies of early Homo, and the behavioral ecology and archaeology of Hadza foragers near Lake Eyasi in northern Tanzania. For many years, I participated in paleoanthropological field research at Koobi Fora, and for the past ten years, I have conducted annual excavations of Oldowan archaeological sites at Olduvai Gorge with other international researchers and students. I conducted the first comprehensive taphonomic analysis of fossil bone assemblages from Early Pleistocene archaeological sites at Olduvai and Koobi Fora, documenting the (then) oldest known butchery marks and recognizing their significance in demonstrating hominin involvement in meat-eating and in the formation of the sites. To provide insights about some of the dynamics of a hunting and gathering way of life and its archaeological signatures, I have conducted long-term field studies of several foraging societies, including the Kua San in Botswana and the Hadzabe in Tanzania (starting in 1984 and ongoing). My current research prioritizes the study of age-at-death, or mortality patterns of prey animals from their teeth to understand how such evidence contributes to reconstructions of the evolution of hunting.

My favorite courses to teach annually include: