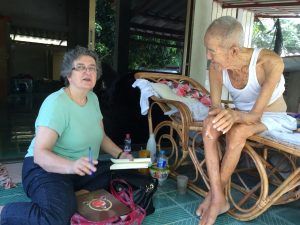 Katherine Bowie has conducted extensive research in Thailand for over 40 years. Combining archival research with oral histories, interviews and participant-observation, her work explores Thai peasant history, political economy, social movements, electoral politics, gender and, most recently, research on anthropological approaches to Theravada Buddhism.   She has just completed a book manuscript on the Vessantara Jataka, the best known of the 500+ folktales about the previous lives of the Buddha. Entitled The Politics of Humor: The Vicissitudes of the Vessantara Jataka in Thailand, this work explores the history of variations in the interpretations and performances of this popular story across three regions of Thailand. Her current research focuses on northern Thailand’s most famous monk, Khruubaa Srivichai ( (1878-1938).

Professor Bowie is the President of the Association of Asian Studies (AAS), having served earlier as a member of the AAS program committee, Benda Prize committee, T/L/C Board, and Council of Committees.   In addition, she has served as President of the Midwest Conference on Asian Affairs (MCAA), Eisenhower Fellow to Thailand, Fulbright Scholar, Book Review Editor for Political and Legal Anthropology Review (PoLAR), multiple years as President and/or member of the organizing committees for the Council of Thai Studies (COTS), and is currently a senior editor for the University of Wisconsin Press’ Southeast Asia Series. At the University of Wisconsin-Madison, she has served on various university committees. She has twice served as Director of the Center for Southeast Asian Studies, receiving an International Institute Award for Outstanding Service. She has been a member of over 70 dissertation committees.

1988 Ph.D. University of Chicago (Anthropology): “Peasant Perspectives on the Political Economy of the Northern Thai Kingdom of Chiang Mai in the Nineteenth Century: Implications for the Understanding of Peasant Political Expression.”

1981 M.A. University of Chicago (Anthropology): In the Wake of the Lords: A Historical Perspective on the Role of Irrigation in the Political Economy of Northern Thailand